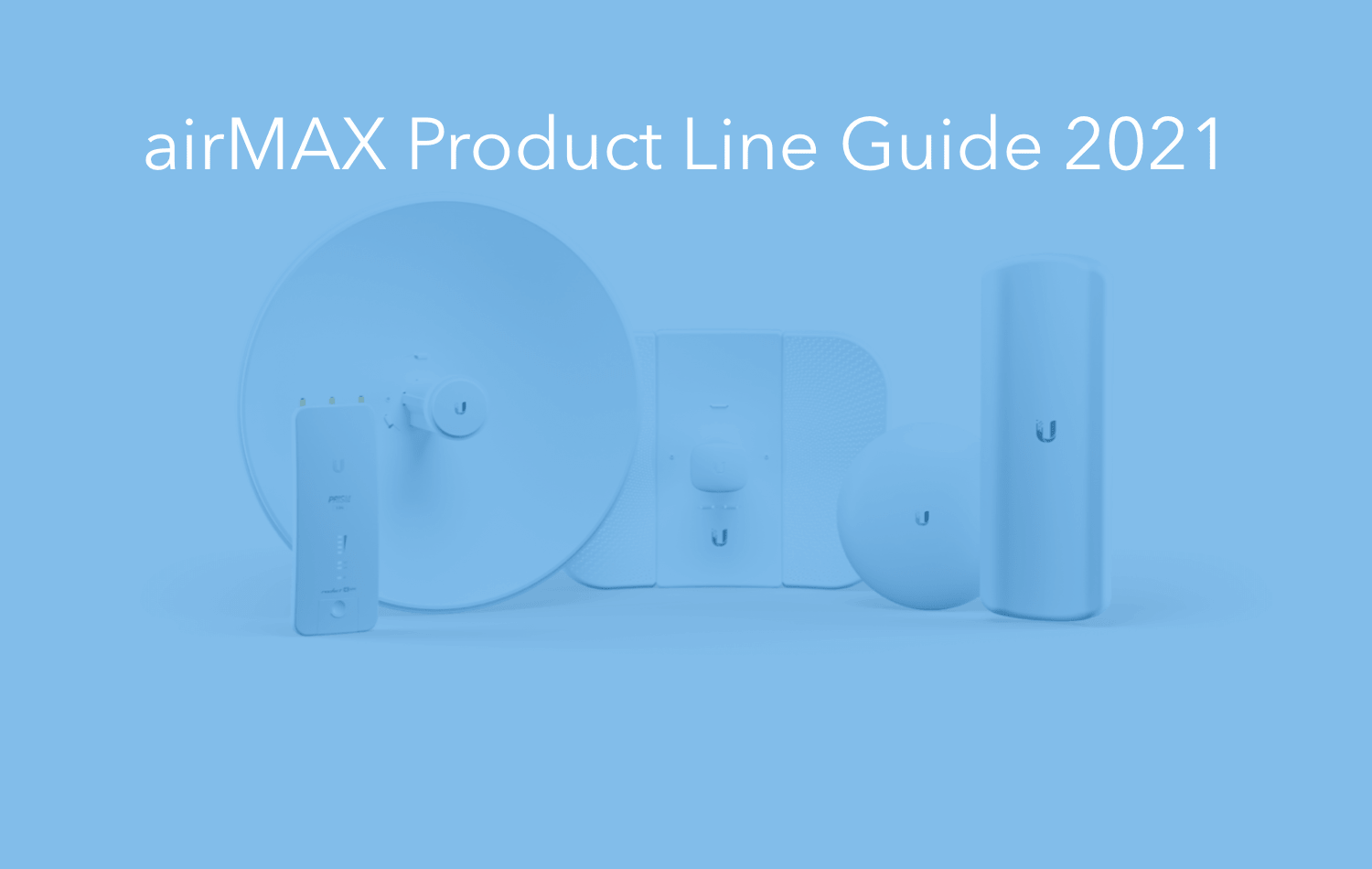 For many new users of Ubiquiti, airMAX and the company’s line of outdoor wireless point to multipoint and point to point solutions (PtMP and PtP) might be an unknown side to the product lines that have given Ubiquiti more traction lately, such as UniFi. In fact, the airMAX line of products was for a time, the largest side of the business and it even helped get the company started. The most successful first product it had, was the original NanoStation way back in 2008.

What is airMAX for?

The airMAX line of products fits a lot of needs, whether that be full blown wireless ISPs (WISPs) which are very common place in the US or as a simple way to get CCTV connected in a business park or for connecting an out building to your main home network without running cables. Ubiquiti has a very large array of products that fit the needs for all of these applications and many more, with a wide choice of frequencies and bandwidth capabilities. airMAX refers to the technology that Ubiquiti developed, it’s a TDMA timing based system and simply put the original 802.11 standard as developed back in 1999 was never intended to be used outdoors over a large distance. It was always meant to be used indoors or if outside all the clients connected would be relatively close to each other so they can do something called carrier-sense multiple access with collision avoidance (CSMA/CA). This system allows all the connected clients to sense which ones are transmitting and receiving and essentially jump in when the lane is free. The airMAX protocol builds upon the existing 802.11 WiFi standard.

This system doesn’t work as well outdoors with airMAX type devices, because the connected clients could be 5-10 miles away from each other. Instead of the clients sensing each other, Ubiquiti developed airMAX, a TDMA timed based system which gives each clients slots to transmit and receive (or talk) in, this improves latency and bandwidth.

When we talk about access points it can be a bit confusing with the terms. We were going to separate the Access Points (AP) and station devices into separate categories, but as you’ll come to see every device can be an AP or station, it just depends on the use case and the environment. You might want a very simple point to point (PtP) connection with only two devices and therefore want a very narrow beam-width to avoid interference, or like in the CCTV business park situation, it would be better to have one very high up wider Access Point covering the area and single receiving dishes around the complex and for those two cases, Ubiquiti has a product best fitted for the job.

The NanoStation was one of the very first products Ubiquiti unveiled at the very start, in the later versions it gained two ethernet ports which became very popular with CCTV installers, as the second port could be used to power up a camera. Nowadays there are better models for the job, such as the NanoBeam 5AC Gen2, which has two ports. It is a better device as it cascade its signal quite as wide, therefore causing less interference, but the NanoStation has its use case, it can be installed discreetly on a drainpipe or on a wall. 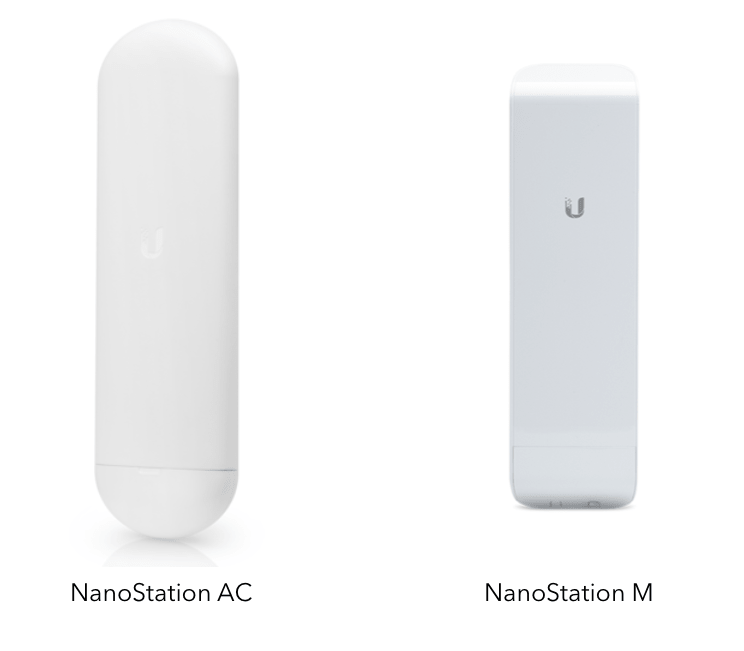 Two main models are offered, the NanoStation M range and the NanoStation AC range. We covered the difference between the two in our comparison article earlier this year but the main difference is speed, the older model only has 100mbps ports, with a max speed of 100mbps as a result. The AC model has 1000mbps ports, supports much higher speeds of 450mbps when using the correct settings. The secondary port on the NanoStation AC can power a device up, such as a PoE camera or a UniFi AP, the power output can be either 24v or 802.3af, depending on how the NanoStation is powered. 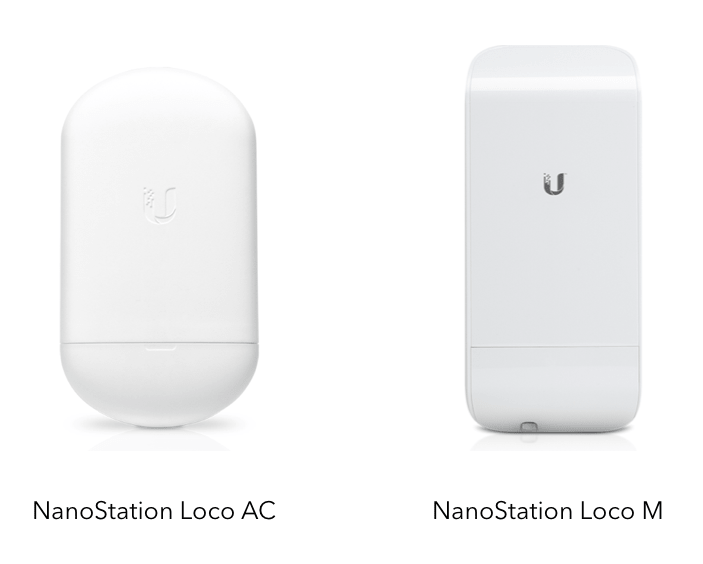 The NanoBeam is offered in a couple of model choices, with the NanoBeam M5 19, NanoBeam 5AC Gen2 and the NanoBeam 2AC 13. All three are exactly the same size and have the same differences as the NanoStation M and AC versions. On paper the NanoStation and NanoBeam are very similar to each other with a very similar amount of antenna gain too. So how do they differ? The NanBeam is a round shape and is more suited as a station device than the NanoStation thanks to its much narrower beam width, essentially casting a much narrower signal, which causes less interference for other wireless devices in the area and picks up less other wireless devices in the area, like all airMAX radios they can function as an access point or station, so the NanoBeam would work best as an AP in a point-to-point environment or as a station in a point-to-multipoint environment. 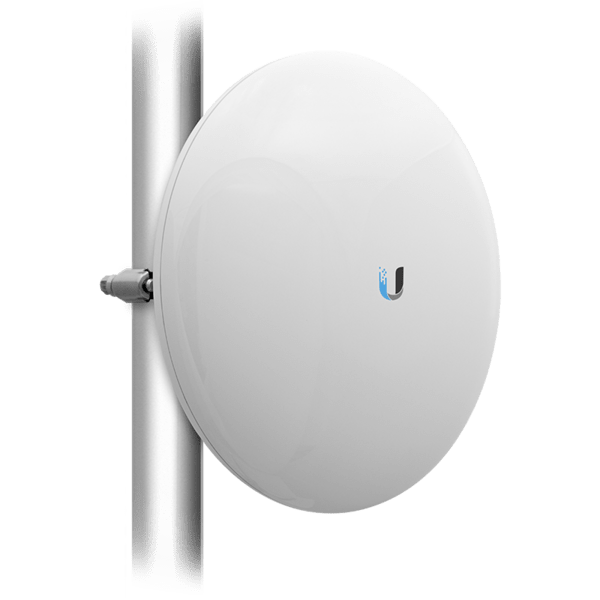 The M5 NanoBeam and NanoBeam 2AC have one single ethernet port and the NanoBeam 5AC Gen2 as two, with PoE passthrough like the NanoStation.

The IsoStation is a kind of odd ball product from Ubiquiti, it is very similar to the NanoBeam at the price point level but has interchangeable horns on the front, which is useful for when it is used as an access point to control the beam width. However as a station it lacks the flexible ball mounting for easy fine adjustment but it does have metal shielding on the back section, which Ubiquiti say is useful for urban crowded environments. 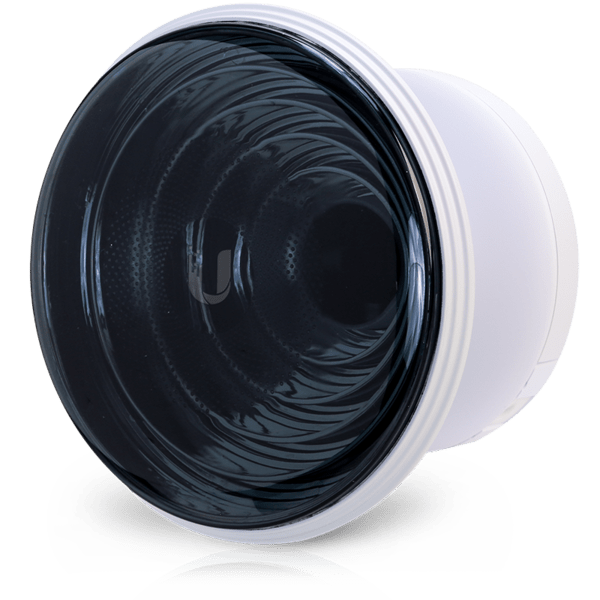 Ubiquiti used to have an M5 IsoStation model which has since been discontinued.

The PowerBeam AC, like the NanoBeam and NanoStation AC models can do 450Mbps but over much greater distances, thanks to the physically bigger sizes. The PowerBeam also comes in 2AC and 5AC versions in 400mm, 500mm and 620mm dish diameters. The larger you go the more gain you have and therefore, on paper the further the maximum distance it can achieve. The ISO 5AC ISO model listed below is identical to the 5AC Gen2 but has extra shielding for better isolation. 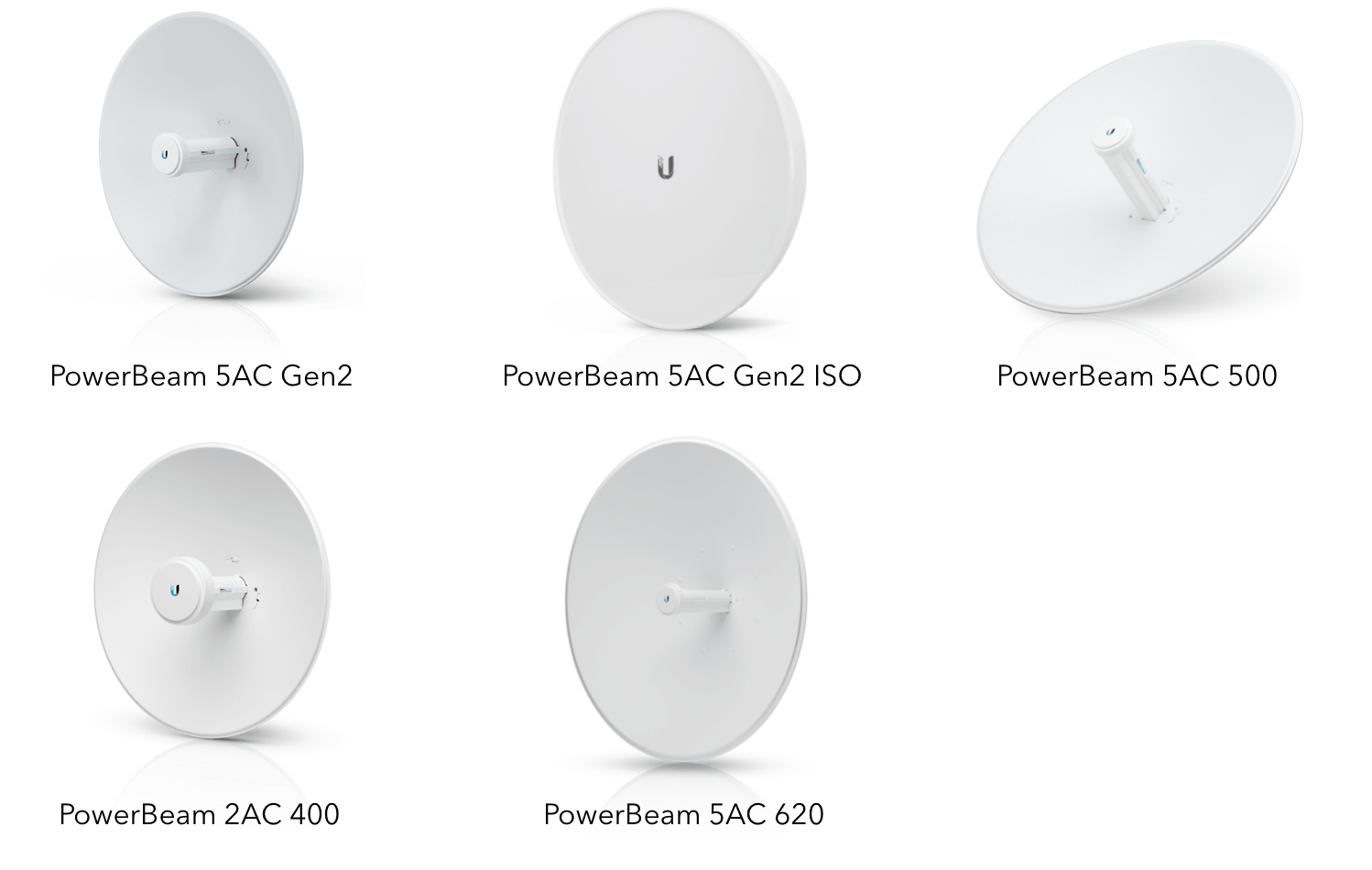 The LiteBeam is very similar to the PowerBeam but is less expensive but due to less metal in the dishes used, it has less RF performance, with larger back and side lobes and less maximum transit power. Ubiquiti has two models, the LiteBeam 5AC and the LiteBeam 5AC Gen2 LR, the LR has two dBi more gain for longer distances. Thanks to the holes in the antenna, the wind load rating is higher than the PowerBeam models.

The two Rocket Prism models Ubiquiti offers are probably the most versatile access points, with no integrated antenna they can be attached to a wide variety of dishes, omni antennas, sector antennas and horn antennas from RF Elements. Ubiquiti offers the Rocket Prism 5AC Gen2 and the Rocket Prism 2AC, as the name suggests one is 5GHz and one is 2GHz and each model has something called airPrism filtering, which can filter out adjacent interference, Ubiquiti says:

Both models have the management radios for mobile app set up, configuration and alignment. 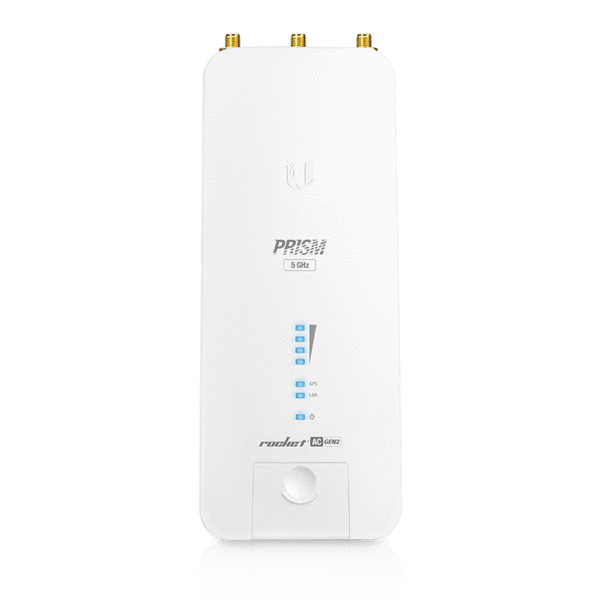 The LiteAP range has two products so far, the older LiteAP 120° and the LiteAP GPS which has 90° coverage. The LiteAP range of access points are generally lower end than the Rocket Prism + RF Elements Horn combination, as they have metal cases, good shielding and so on. The LiteAPs are all plastic, but have good wide coverage which would be a good price effective option for a farm or CCTV deployment. The LiteAP GPS has, as the name suggests GPS built in for timing and syncing up multiple APs on one tower, which can if done correctly offer higher performance. 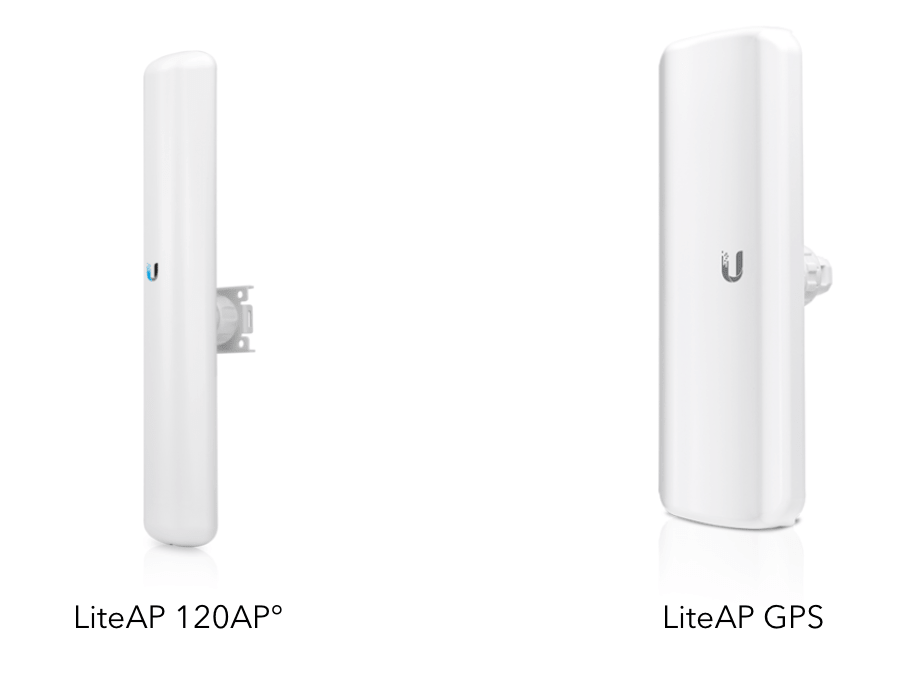 The airCube is designed as an in home router for WISP customers, available in a ISP and AC model. Both models can be powered by 24v passive, and then send PoE back out via the WAN port to a Ubiquiti radio, which means only one power supply is needed. The ISP model is 2.4GHz only and the AC model supports both 2.4GHz and 5GHz, the AC model can also be powered by an included power adaptor. 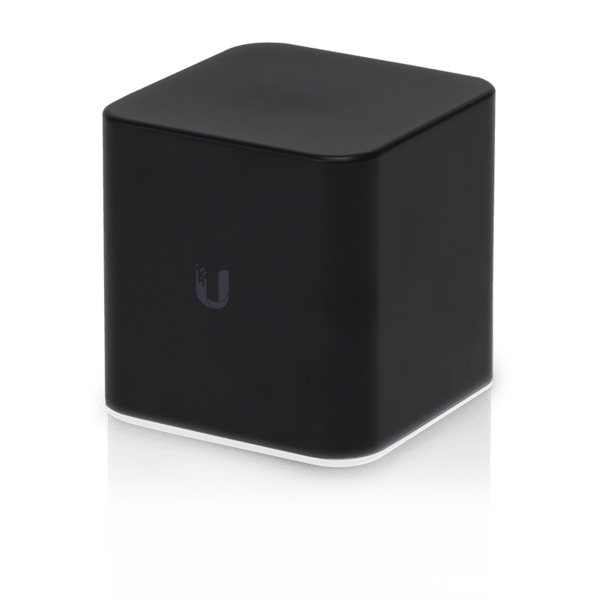 airCube supports DHCP, Static IP and PPPoE on the WAN and is fully managed by UISP.

UISP is a cloud managed controller for sunMAX, EdgeMAX, airMAX, airFiber, uFiber and LTU devices and they can be reconfigured, set alerts, see stats and more without logging into each device. Backups can be taken from devices and topology maps can be drawn too, which are all live showing you what section of your network has gone down. Ubiquiti also offers a mobile app for UISP with a lot of the same features, including live alignment of airMAX and airFiber devices. 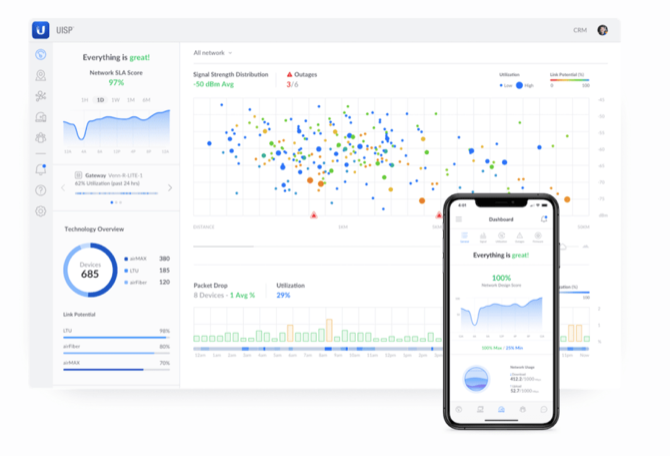 For small ISPs, getting billing set up can be a challenge, thankfully included with UISP is a CRM software suite, with ticketing, billing, scheduling and accounting all integrated for free. Ubiquiti even offers its own payment gateway in place of PayPal.

Ubiquiti offers a free cloud instance of UISP for free over on uisp.com for a minimum of 10 devices or more, for any less the best and easiest place to get started is HostiFi by Reilly Chase.

Ubiquiti offers a few light application switches for use with airMAX radios if the demand for and EdgeMAX switch wasn’t there. These include the NanoSwitch, Quick-Mount and more.

The NanoSwitch can be used at environments where a couple of 24v passive devices, such as the G3 Bullet camera or NanoBeams and NanoStations are used. You can run one cable from the power source to the NanoSwitch and then proceed to power up three other external PoE devices. The switch is unmanaged and has no GUI interface. 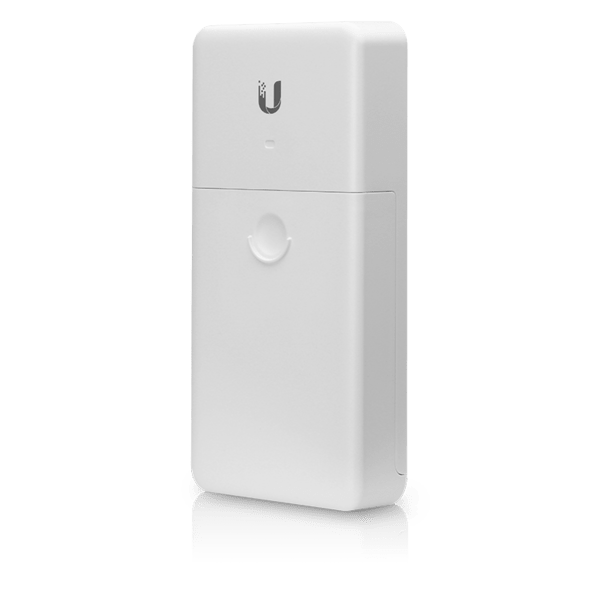 The Quick-Mount option for use with some of the smaller CPE devices, such as the NanoBeam, NanoStation Loco and NanoStation. It is designed to be a tool free installation and it offers the NanoStation products the ability to adjust the elevation, which isn’t possible without an external mount. 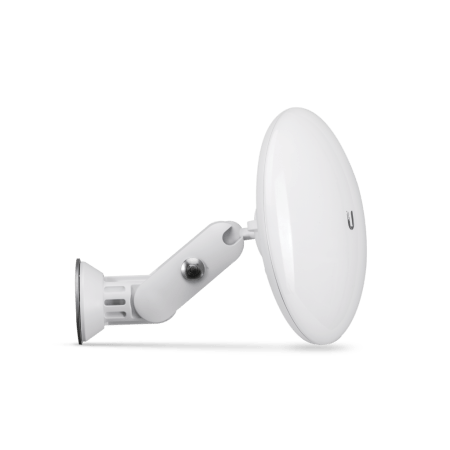 You can find all the products mentioned here on Amazon.