Last week, Ferrari announced its first SUV, the Purosangue. Despite obvious assumptions, Ferrari has avoided the need for any electrification with this new model, instead using a naturally aspirated 6.5-litre V12 with 715bhp and 528lb ft torque. This is Ferrari’s first four seater, four door car and the company has said it has been built to be “a true sports car.” Ferrari has built four seater cars before, with many […] 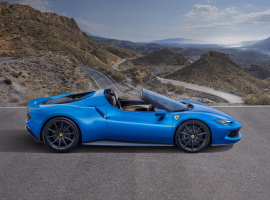 Ferrari has this week revealed a new convertible version of the 296 GTB, with the 296 GTS. Both cars are hybrid and use a turbocharged V6, which together make 819bhp. For the convertible roof, Ferrari says it only takes 14 seconds for it to fold up or down and can be operated at speeds up to 28mph. The rest of the car looks identical to its hard topped stablemate, the […]