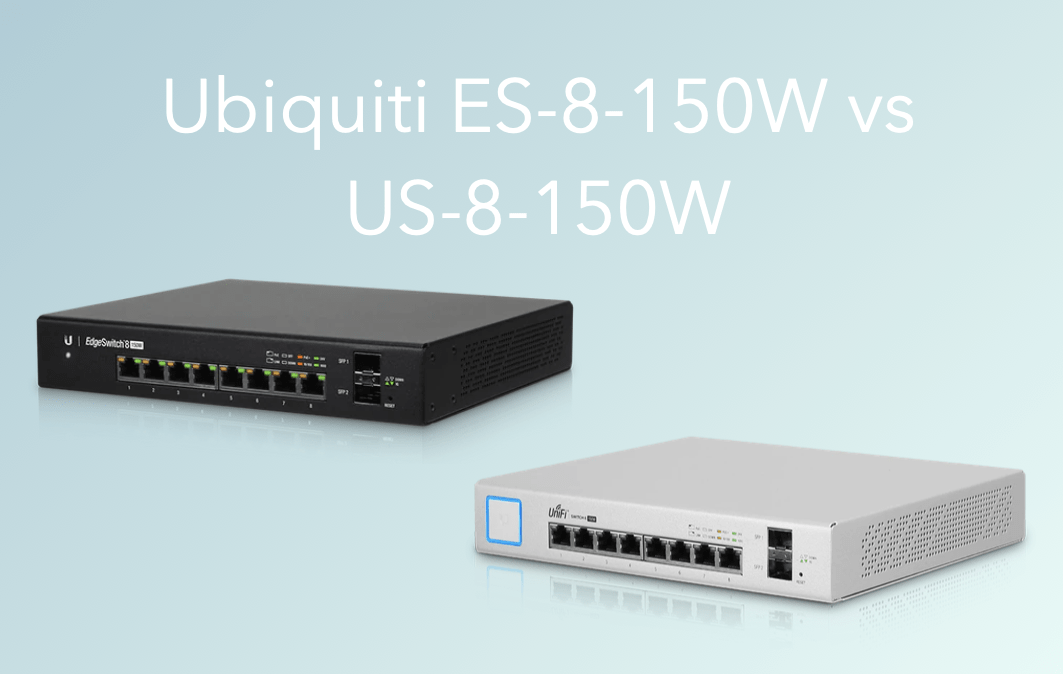 Ubiquiti launched the US-8-150W in around 2016 and was the first eight port UniFi switch available at the time. It has very flexible PoE options, supporting 802.3af/at as well as 24v passive PoE. The addition of 24v passive was especially important at the time, as Ubiquiti had multiple UniFi AP models on sale that were powered by different types of PoE.

At that time, Ubiquiti had the UniFi AC Pro which was powered by 802.3af/at as well as the UniFi AC Lite and the AC LR which were powered only by 24v passive. In the years after, Ubiquiti made the decision to standardise it’s use of PoE in the UniFi line to autosensing PoE only and leave the passive PoE to the airMAX and WISP line of devices.

To go alongside the US-8-150W, Ubiquiti also releases an identical looking EdgeMAX version, with the ES-8-150W. Functionally, they are identical, under the skin they both run the same EdgeOS base but are managed in very different ways, the UniFi Switch has no local GUI and is managed only in the UniFI Controller and the EdgeSwitch has a local GUI, with some very advanced features, many of which are not available on UniFi switches.

So far, Ubiquiti hasn’t really done this since, there have only been two switches released which looked identical and had corresponding UniFi and EdgeMAX editions. There were these switches here and the UniFi Switch 16-150W, which also had an EdgeSwitch version.

Going forward, Ubiquiti seems to be drifting away from the EdgeRouter and EdgeSwitch line, instead focusing its efforts on the new UISP devices, such as the UISP Switch and UISP Router, no doubt with many more to come.

Considering both switches are fundamentally the same, it comes down to two things. Do you have a full UniFi setup and like having everything in one single pane of glass, or do you not mind but need a solid PoE switch with flexible options. With the price, the UniFi one is slightly more than the EdgeOS one, but it’s not much.

It also makes a difference what power options you have, do you have a DC system, if so then the EdgeSwitch would be more suitable.