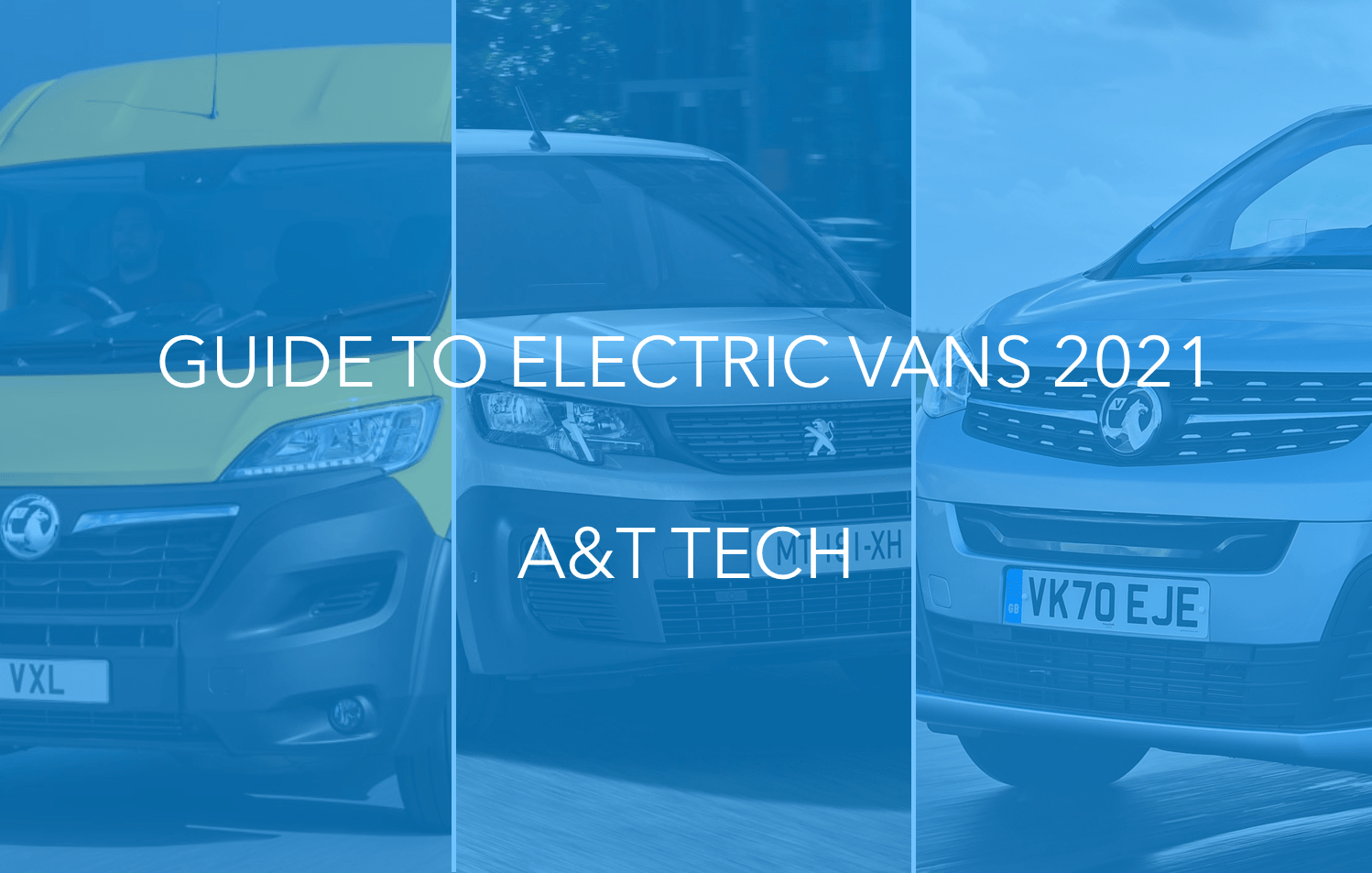 As the 2030 deadline is approaching for new hybrid and electric cars and vehicles to be sold in the UK, a lot of manufacturers are getting their van and commercial vehicle lineups ready and more established, with electrified versions being released all the time. Just this year, Stellantis which was formed earlier this year and owns Peugeot, Citroën, Opel, Vauxhall and more have combined forces and already have a solid line up of electric vans ready. Toyota has two van models on sale, and still shares platforms with Stellantis, therefore giving them two models with electric powertrains.

Electric propulsion is important for commercial vehicles, a lot of the new models have a range of just over or just under 200 miles and at the moment, are aimed mostly at urban and last-mile delivery services. Essentially using them to get from local depots to customer houses, which in towns and cites will dramatically help with air pollution. This is especially key as London, Bristol and Birmingham have or are planning on introducing Clear Air Zones.

In this guide, we will be covering all the new and important electric van models in various size categories and what grants are available.

As it is with some less expensive smaller electric cars, some manufacturers such as Fiat, Vauxhall, Citroën and Mercedes have simply taken their existing combustion based models and stuck some batteries in. This hasn’t affected their total cargo space, as in most cases the batteries and motors sit in the same space as the engine. However, there are other brand new models which have been built from the ground up to be electrically powered such as the e Deliver 3 from LEVC, the company behind the all new taxi for London.

In terms of grants, the Government is more generous than it is on the personal car side. Recently the grant for electric cars has been reduced from £3,000 to £2,500. With vans, the grant is up to £8,000 for any electric or plug-in van.

Car-derived vans have been around for decades, they take a standard passenger car, remove the backseats and have a relatively large cargo section. In the combustion market, Ford and Vauxhall both offer van versions of the Fiesta and Corsa but in the electric market, only one model is available so far.

Car-derived vans tend to offer better interiors that small vans with more equipment, better handling and are better to park. The best use case for them is for small intercity deliveries and for professions where there is a small amount of tools required, but still some load space. Delivery drivers, cleaners, site managers and florists all come to mind for this type of vehicle. 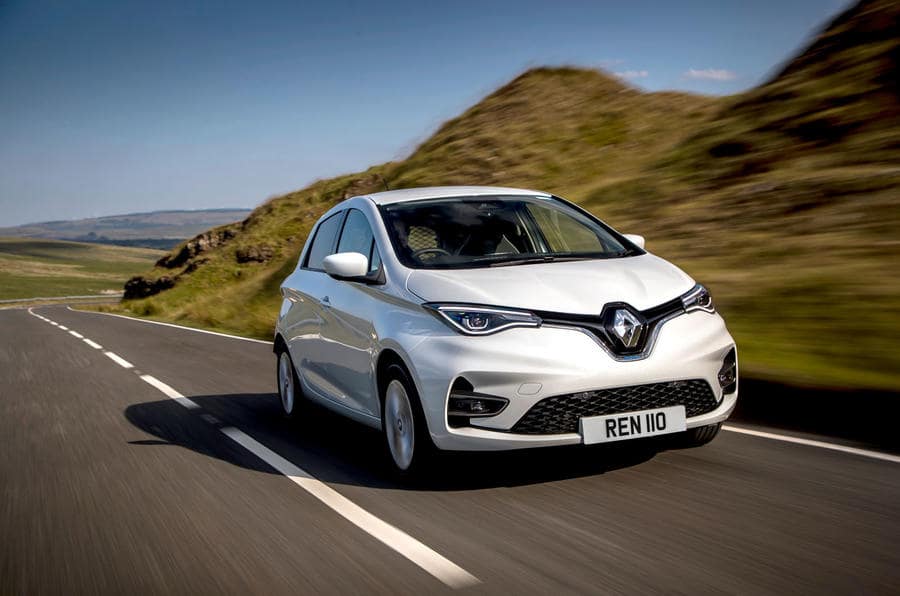 The new Renault Zoe Van was released last summer and is based on the popular car version. With around 245 miles of range from the same 52kWh battery pack and 107bhp electric motor. Renault made the rear windows blacked out and removed the rear seats so in the back, there is a flat floor.

Inside is a 7-inch touchscreen with support as standard for Apple CarPlay and Android Auto. Other extras include air conditioning, heated door mirrors, automatic headlights and wipers and 15-inch steel wheels.

Renault offers a five year warranty and prices without VAT are £19,380. The standard passenger Zoe is £28,795 with VAT. 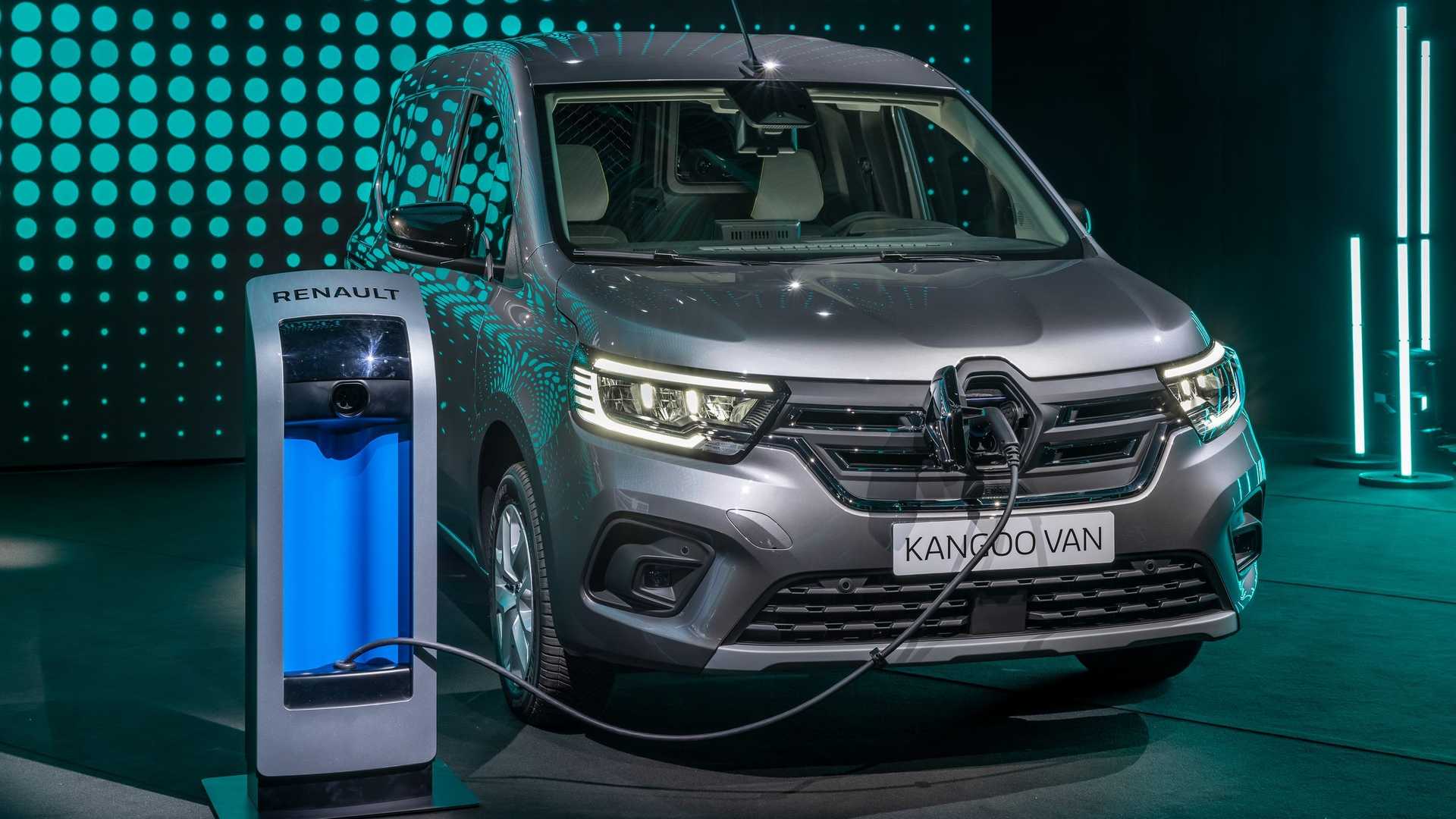 Renault is replacing its existing Kangoo small electric van later this year and its due to go on sale here in the UK in 2022. It’ll be based on the new Kangoo van it launched ADD DATE AND LINK. The electric model will have 164 miles of range from a 72kW, 102bhp motor and have six driving modes.

It is due to go on sale in the EU later this year and in the UK next year. Prices are yet unknown. 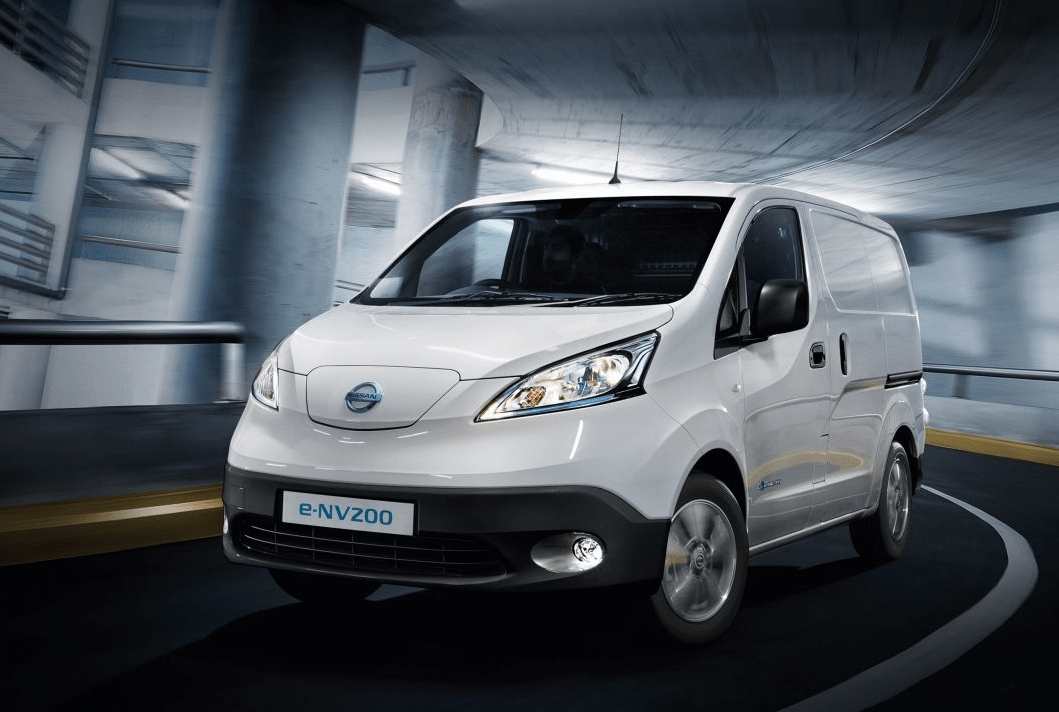 The e-NV200 went on sale in the UK in 2014 and it has various revisions since then. It uses the same electric running gear from the Nissan Leaf hatchback. The very first models only had a 24kWh battery pack which gave the van a rather small range of 60 miles.

A couple years ago in 2018, Nissan updated the van and gave it a new 40kWh battery, bumping the range to 174 miles. It supports rapid charging, allowing a full charge in under an hour.

The e-NV200 has NissanConnect EV built in too, allowing you to control the interior temperature remotely. 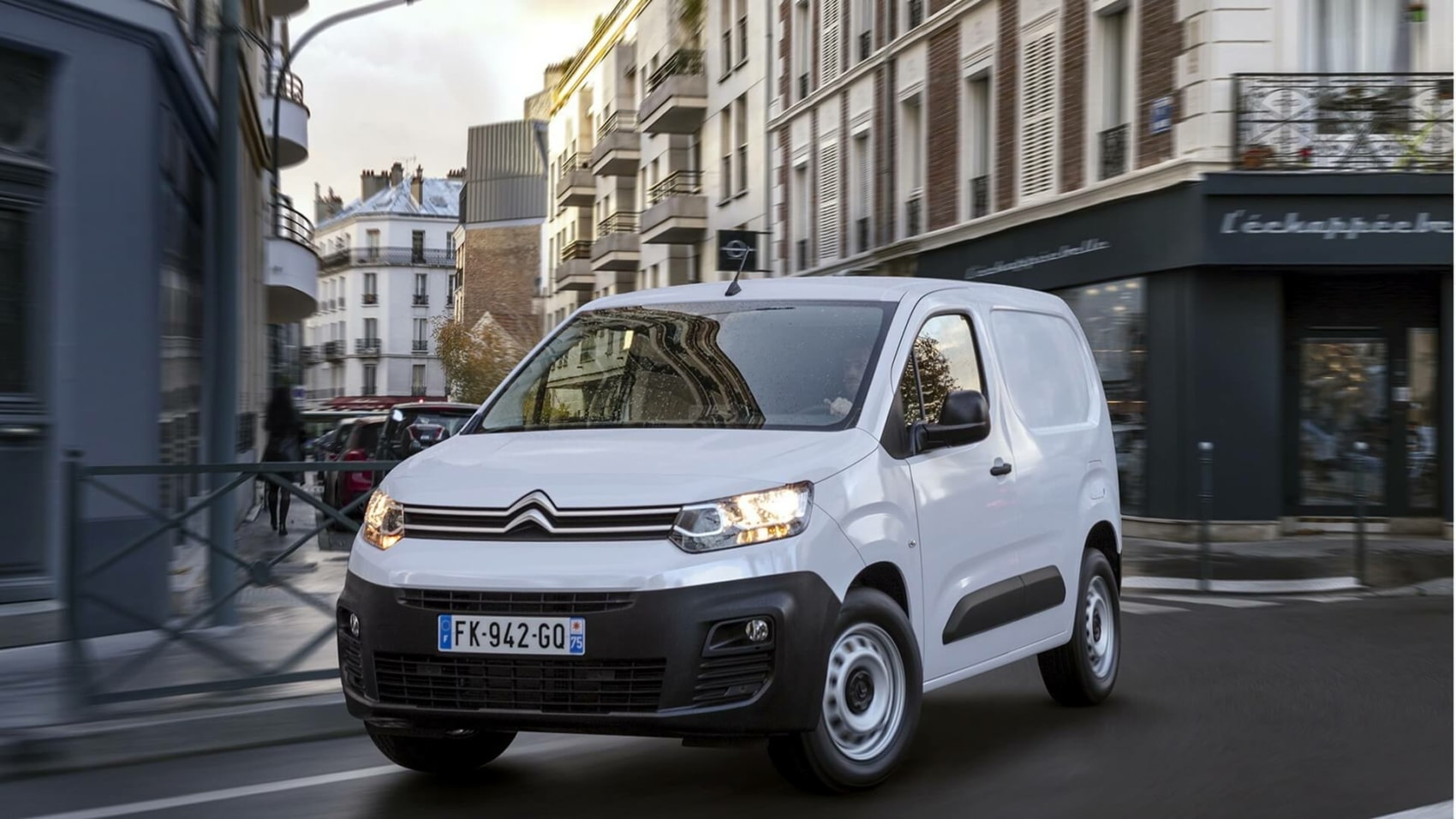 All four of these vans share the same underpinnings, based on the Stellantis platform and were all announced earlier this year. All four are due to go on sale later this year.

As with conventional piston powered vans, two body sizes are available as well as a crew option, with seating in the rear.

Inside, an 8-inch touchscreen is fitted as standard with support for the latest smartphone mirroring systems, Apple CarPlay and Android Auto.

All four vans are due to go on sale this autumn, with no pricing information available yet. 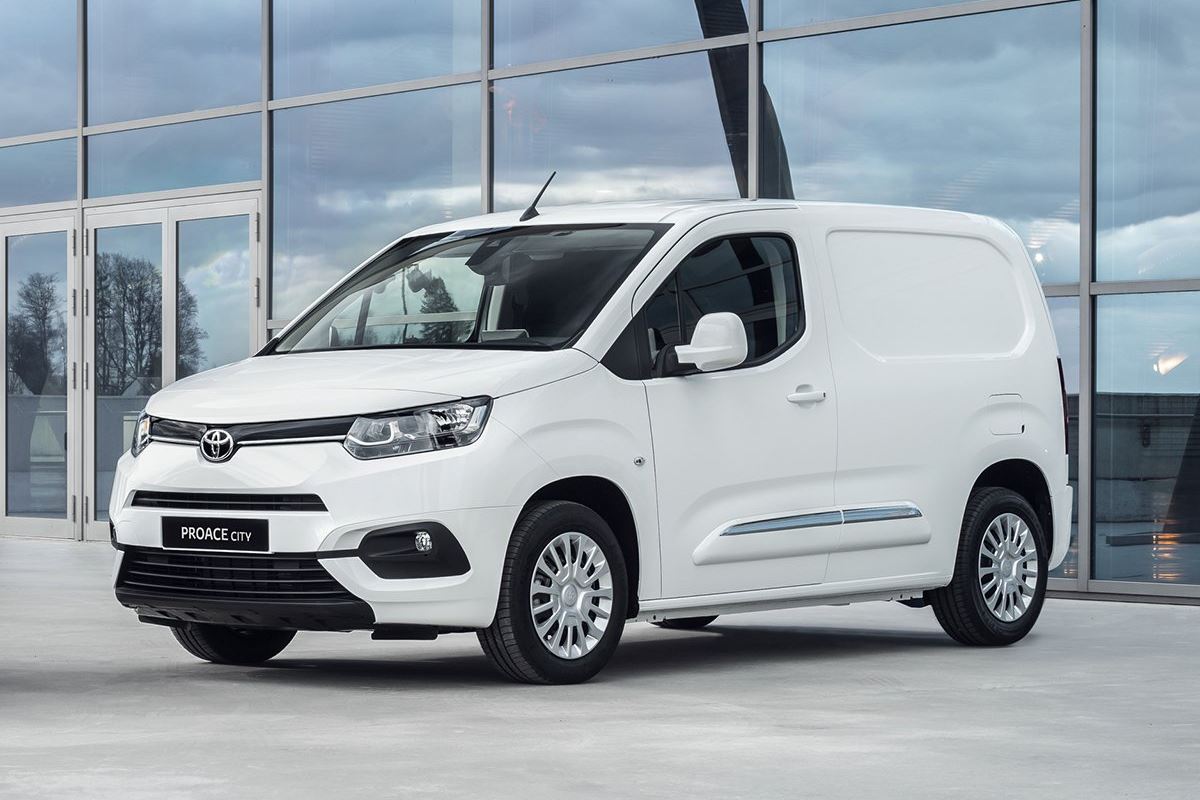 Toyota and the PSA group, which is now Stellantis have long shared platforms for its commercial vehicles and with the Toyota Proace CITY Electric, it is no different. This model is identical to the four vans described above, with the same electric motor, battery and equipment.

However, the only difference is the the range. Toyota is claiming a range of 200 miles here.

The van is due to go on sale this autumn, with no pricing information available yet. 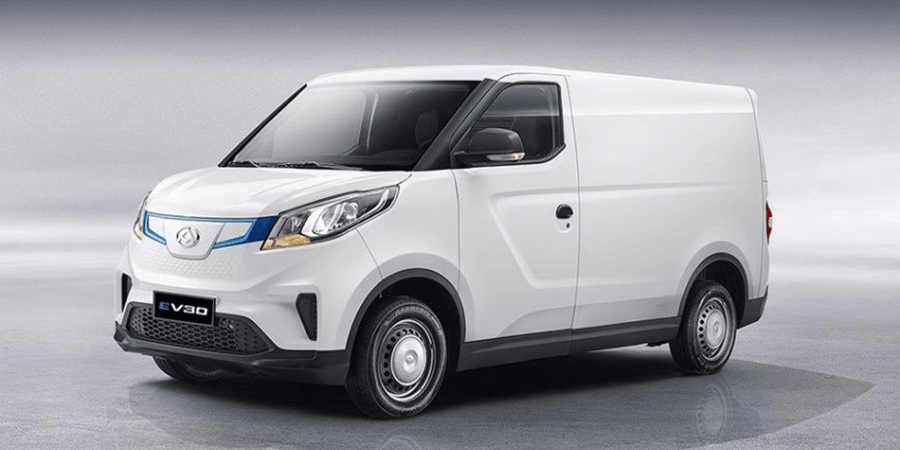 The Maxus e Deliver 3 is a small van from the Chinese company, owned by SAIC Motor which is currently in charge of MG and Roewe. The e Deliver 3 was built from the ground up to be all electric ad has a large payload, of 1020kg which is actually more than any other electric or diesel small van on sale in the UK. 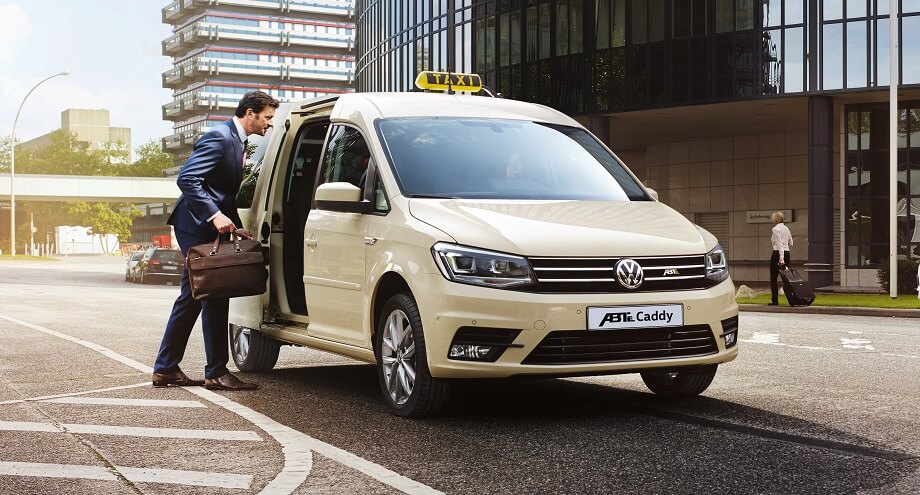 Volkswagen announced the new e-Caddy last summer, based on the last generation Caddy van and converted to electric by tuning company ABT. The small van in electric form won’t be making its way to the UK however.

It does have a 37.4kWh battery pack, 108bhp and a limited top speed of 75mph. Rapid charging is supported from CCS.

The e-Caddy will be available as a panel van or an MPV. No release date has been announced yet. 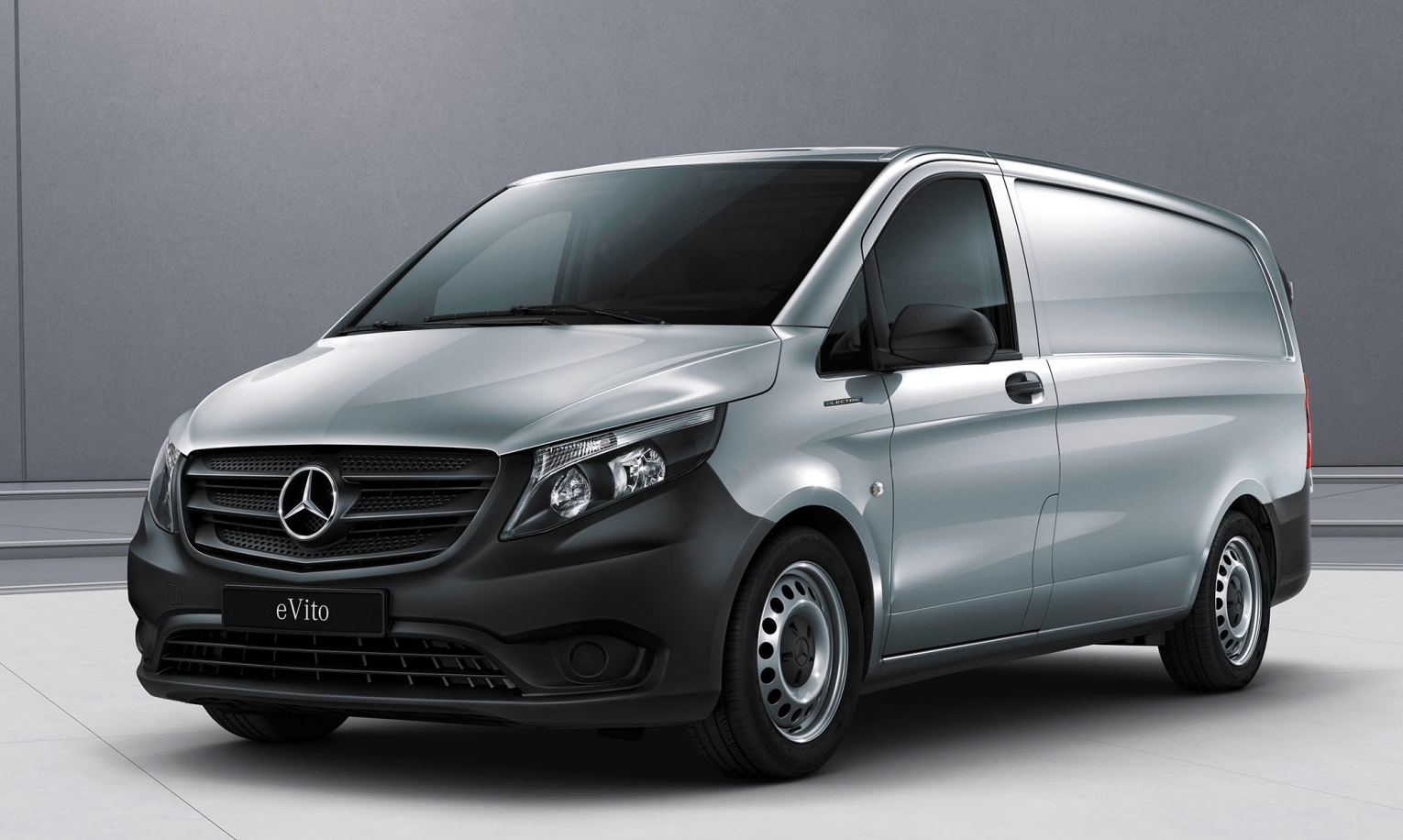 Mercedes launched the new eVito last year, based on the combustion Vito panel van the company offers it has a 41kWh battery pack and a range of 93 miles. However at low speeds, this range could get up to 104 miles.

The eVito isn’t compatible with CCS fast charging, but it does have a onboard 7.4kWh charging system. Payload is up to 923kg on the longer wheelbase model. 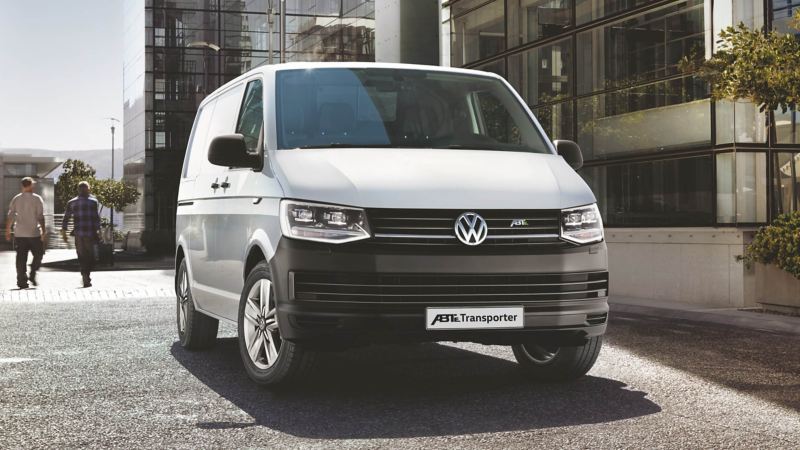 Like the smaller e-Caddy Volkswagen has announced, the e-Transporter is also converted to electric by ABT, a third party to VW. Powering the Van is a 83kW electric motor with 110bhp. The battery pack is 37.3kWh and has a range of 82 miles.

50kW rapid charging is supported here, getting the e-Transporter from 0% to 80% in 45 minutes. Payload here is 996kg, which is a bit less than the standard piston based Transporters.

It is only offered in a short wheel base configuration, but can be had as a Kombi version, with five seats. 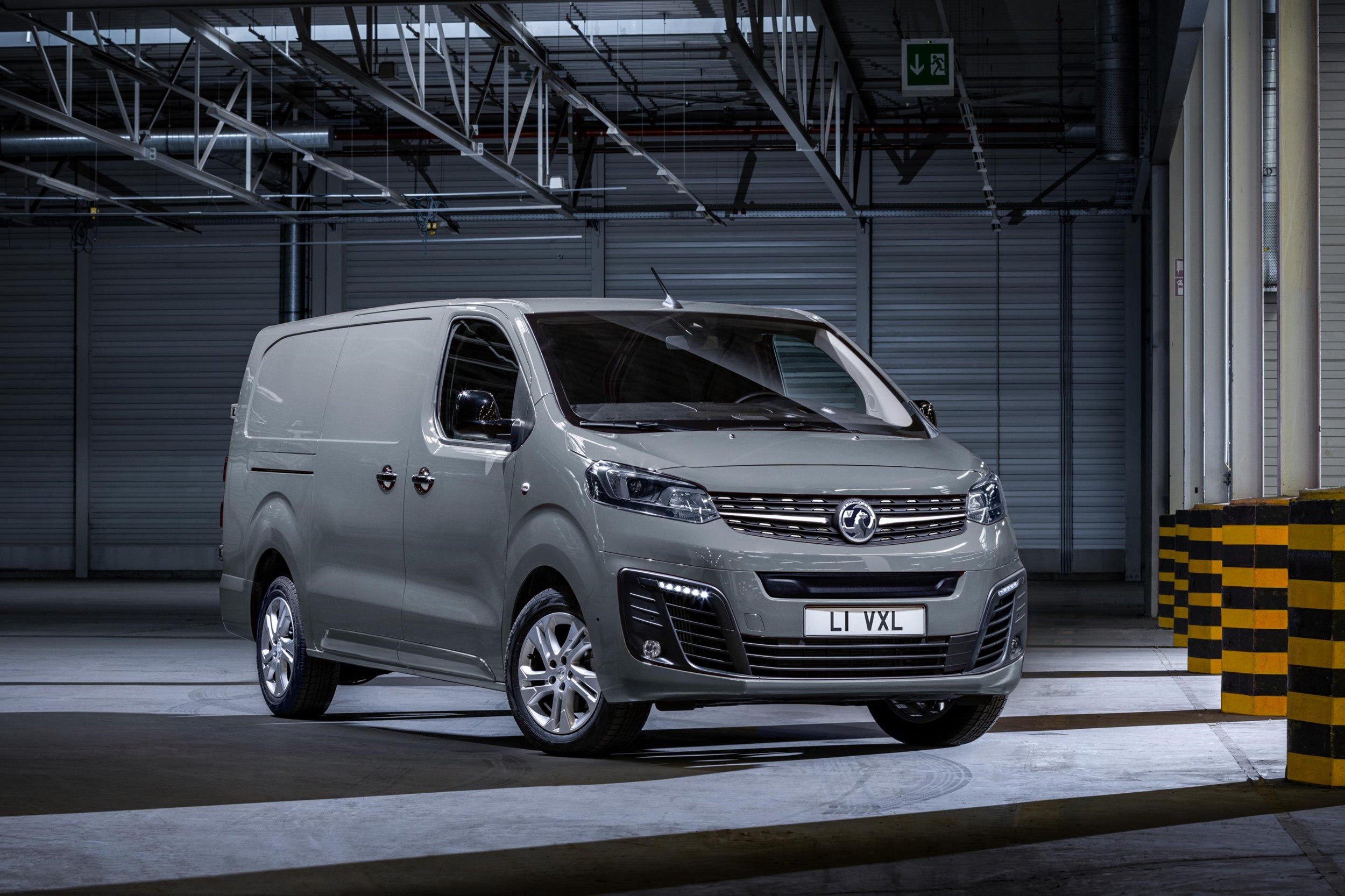 All four of these vans share the same underpinnings, based on the Stellantis platform and were all announced fairly recently. Citroën launched the e-Dispatch in summer 2020. All four are on sale now.

All four have up to 205 miles of range from a 136bhp electric motor which drives the front wheels. All four have a 50kWh battery as standard but have the option of a 75kWh version too. With the smaller pack, expect 144 miles of range and 205 from the larger pack. 100kW DC rapid charging is supported on all models.

Not everything is identical however, in this range Vauxhall is the only one to offer its van in a crew option, whereas the others are offered in various body sizes. 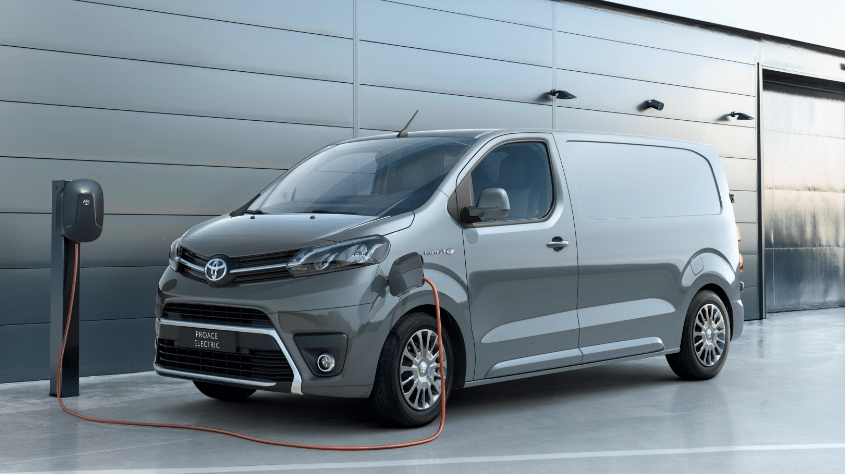 Toyota and the PSA group, which is now Stellantis have long shared platforms for its commercial vehicles and with the Toyota Proace Electric, it is no different. This model is identical to the four vans described above, with the same electric motor, battery and equipment.

However, the only difference is the the range. Toyota is claiming a range of 143 miles on the 50kWh pack and the same 205 miles on the 75kWh pack. 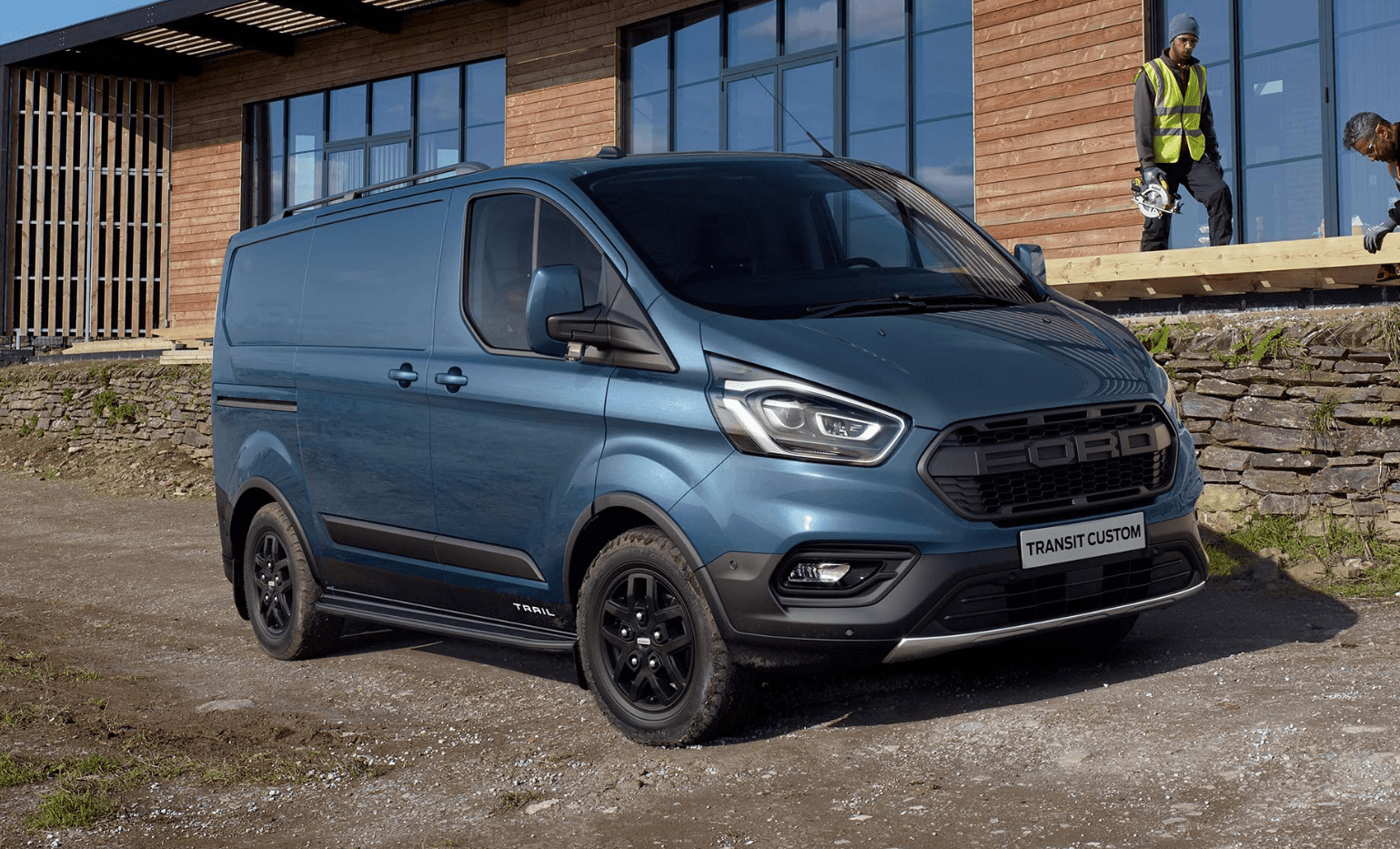 Ford confirmed earlier this year that the popular Ford Transit Custom will be available with an all electric model in 2023. Ford is planning on launching the larger E-Transit in 2022 so this will come afterwards.

At the same time, Ford will launch it with the option of mild-hybrid diesel and a plug-in hybrid.

No prices are yet known. 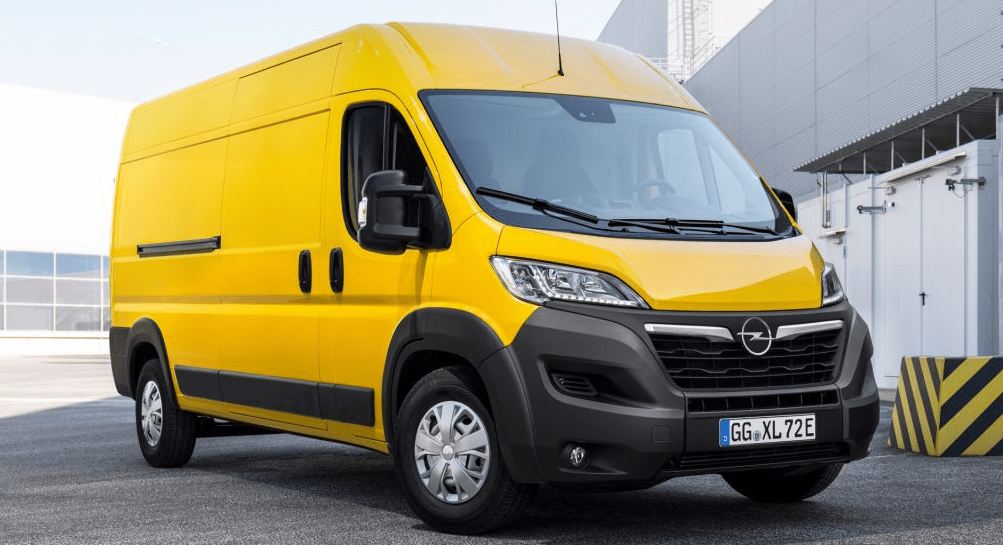 All four of these vans share the same underpinnings, based on the Stellantis platform and were all announced fairly recently. All four are on sale now.

The battery and drivetrain are identical. With a 121bhp electric motor, 350Nm of torque. The top speed on all the models is slightly different, around 60-75mph.

In terms of body styles and sizes, a chassis cab model, a passenger version with more seats in the back are available and two different body lengths.

Each van has varying levels of standard trim from the one one trim level offered, none of them have Android Auto or Apple CarPlay from the 5-inch touchscreen. 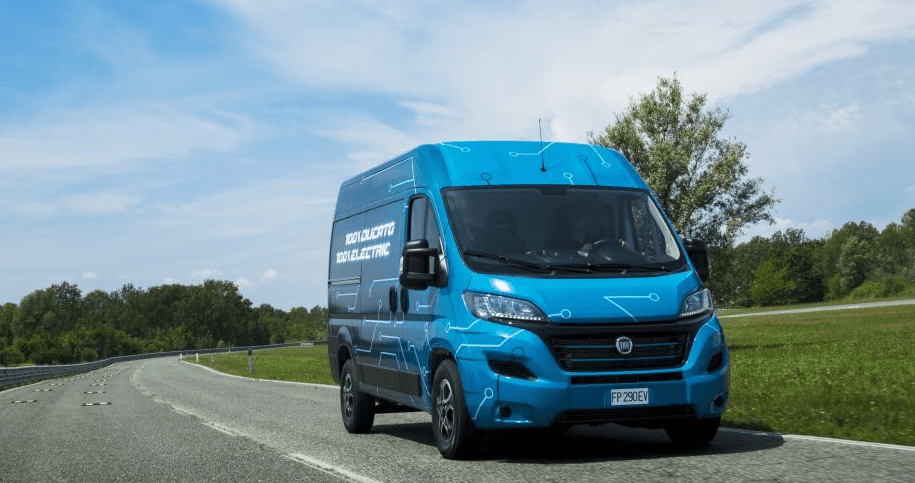 While the e-Ducato, Movano-e, e-Relay and e-Boxer all look pretty identical, the e-Ducato has a different battery technology to the offerings from Vauxhall, Opel, Citroën and Peugeot. This is due to the technology being developed by FCA in 2019, before being merged with PSA earlier this year. Stellantis also owns Ram, who use the same platform for the Ram ProMaster but there is yet to be an electric version of this van.

In terms of electric power and range, the van has two battery packs to choose from, 47kWh or 79kWh, with range of up to 230 miles on the larger pack. However, opting for the 79kWh version does add £15,000 to the price.

The e-Ducato from Fiat can be ordered now and prices start from £59,699 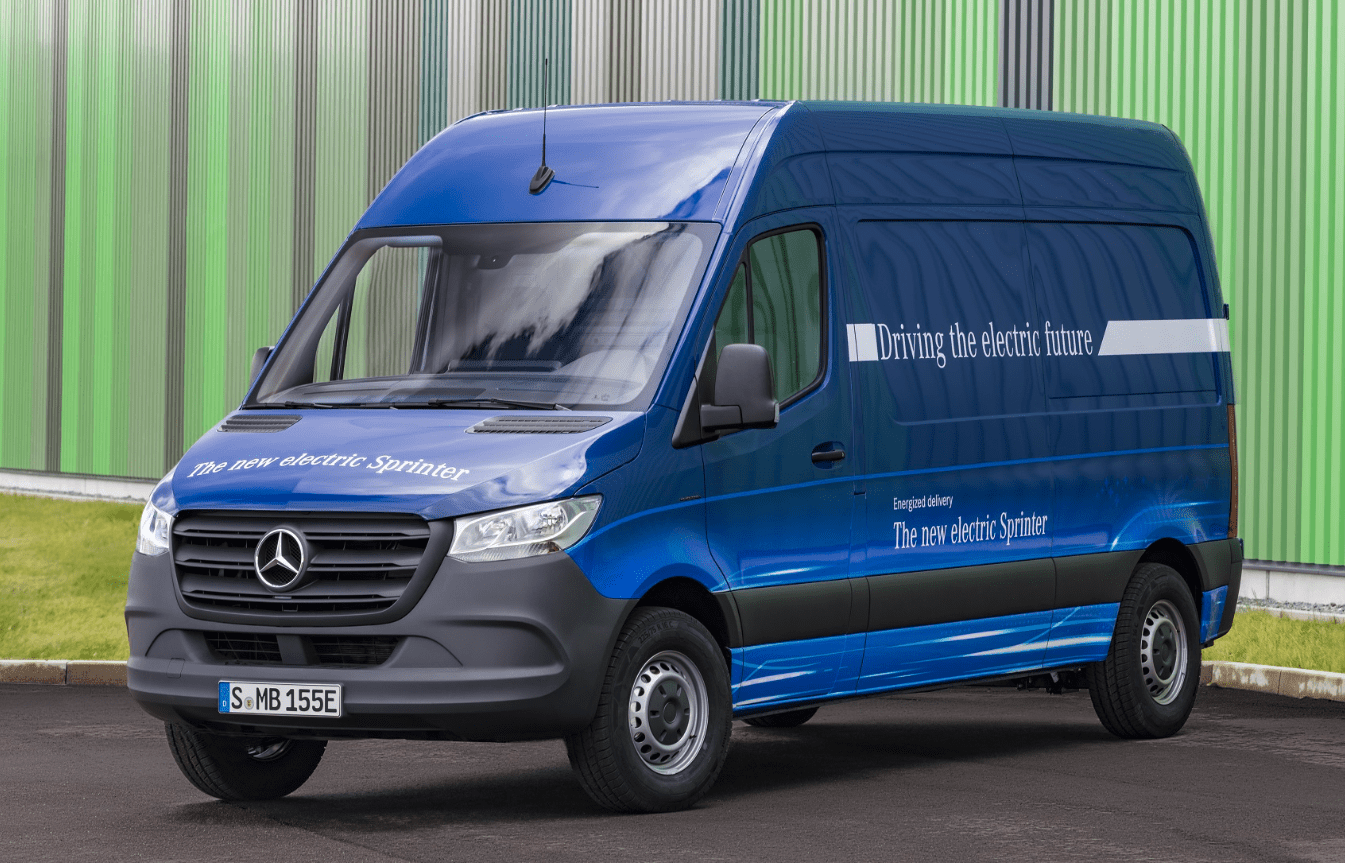 The new Mercedes-Benz eSprinter went on sale last summer for £51,950 and has a range of 96 miles. It has a 55kWh battery pack and has a stop speed of 83mph.

DC fast charging is supported here, either at 20kW or 80kW.

Only one trim level is offered and it comes with a DAB radio with Bluetooth, USB connectivity, a heated driver’s seat, air conditioning and heat-insulating glass 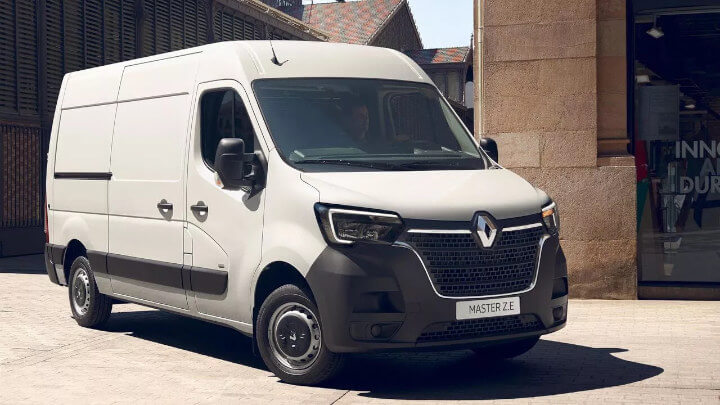 The new Renault Master ZE has a range of 124 miles and is priced from £64,500 in the UK. Power comes from the same 33kWh motor Renault uses in the ZOE.

The Master ZE comes in three different lengths and two heights and can carry 1,700kg of payload. Renault is even offering Luton low-loader version as well as a Chassis Cab. 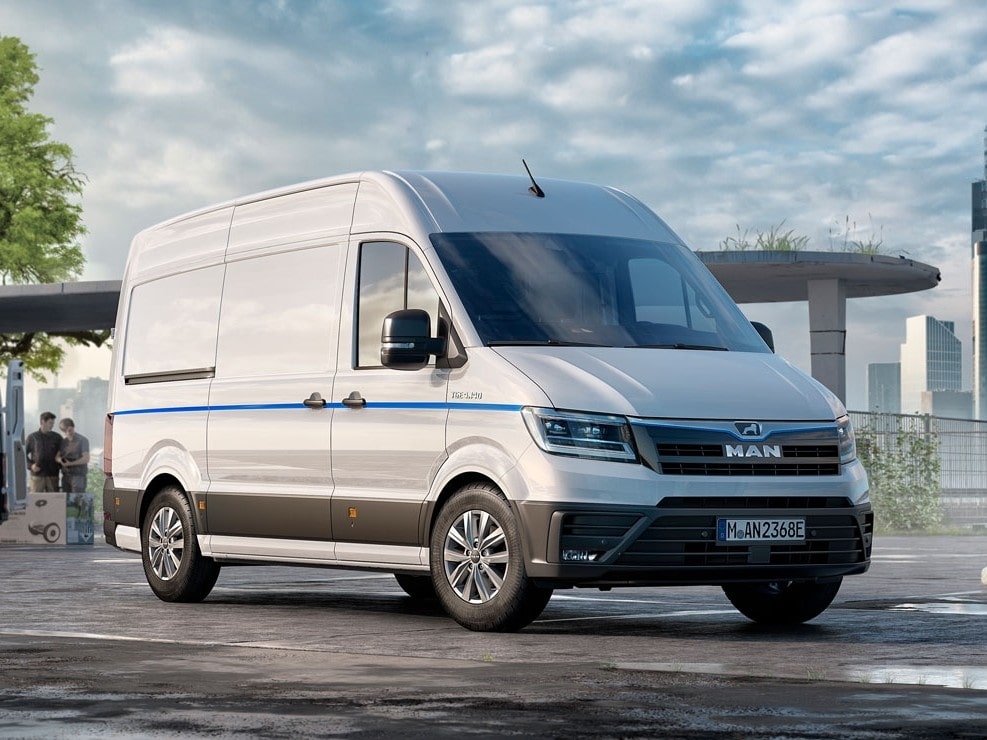 The standard piston versions of the VW Crafter and MAN TGE are virtually identical and the electric versions of them are closely related too. They are both large panel vans with the same 35kW battery as the now discontinued eGolf, this is paired with an 100kW electric motor to give the vans a range of 107 miles and a charge time of 45 minutes from 0% to 80% if using 40kW DC fast charging.

Inside there is a 7-inch infotainment screen with navigation, cruise control and climate control.

Prices start at €69,500 for both the Volkswagen and the MAN, no UK pricing has yet been confirmed. 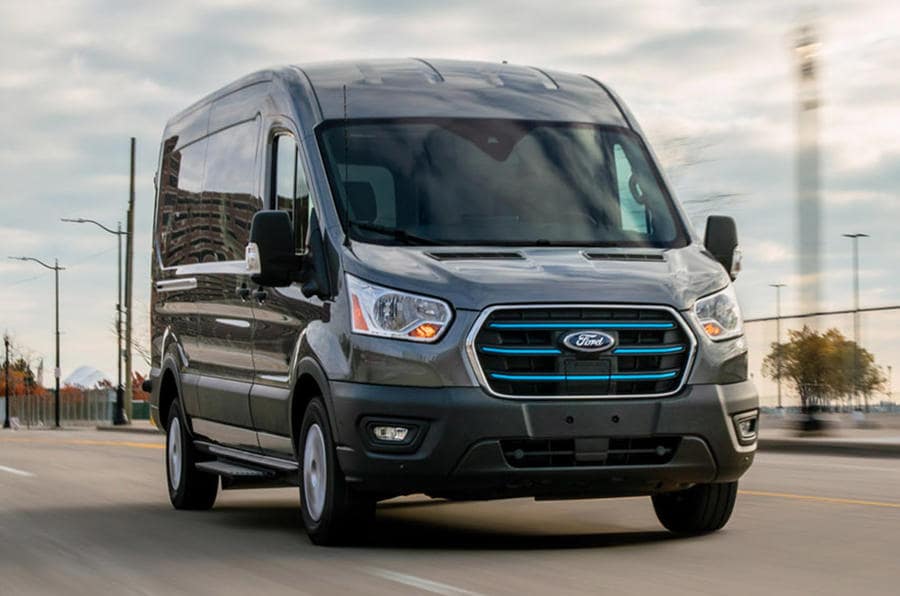 The new Ford E-Transit isn’t on sale yet in the UK, it is due to launch in Europe in 2022. Ford will have over 25 different sizes available with a ranger of up to 217 miles. The battery pack is 67kWh and it supports DC last charging at up to 115kW.

Inside, the E-Transit has a large infotainment screen with support for Sync 4, Apple CarPlay and Android Auto.

It is due to go on sale in 2022 with prices yet to be confirmed.